Richard Alig’s family has a proud production agriculture history in 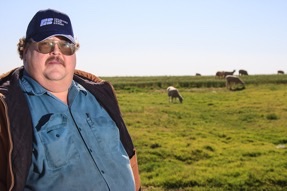 Oklahoma dating back to 1893 when his great-grandfather settled the Peter Alig Homestead near Okarche. Richard and his family still farm the same land today. He credits his dad, grandfather and great-grandfather for their farm’s progressive nature. They have readily adapted to changing regulations, increasing input costs and challenging weather patterns to remain in production for over a century.

“They did a lot of soil conservation programs before they were necessary. They respected the soil because they knew what it had to produce.” Alig said of his ancestors, and he has proudly carried on their legacy of respecting the natural resources in his care.

The Alig’s were early adopters of no-till farming and have, in the last three years, implemented a cover crop system to preserve the soil on their farm. Keeping the soil covered is beneficial in maintaining the nutrients and moisture.

“Especially in Oklahoma, we have to conserve the water. And they don’t make any more soil.” Richard said.

Theirs is not a typical wheat farm, with harvests every summer. Using a different mixture of seed each year including radishes, corn, rye, sun hemp, wheat and others, the Alig’s run 1,500 head of stock cattle and approximately 300 ewes on their 2,500 acre farm.

“We probably haven’t cut a cash crop in 20 years,” said Alig. “We figured out we were more successful putting on pounds of beef, rather than selling bushels of wheat.” 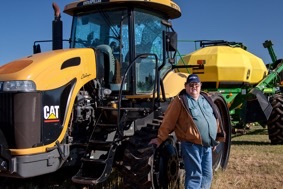 The notion that farming and ranching operations are outdated is put to rest on the Peter Alig Homestead. Their tractors and no-till drills use the latest in GPS technology to ensure seeds are properly planted and reduce the need for spraying. They are efficient in every aspect of the operation.

“Today is modern agriculture. We are less than two percent of the population and are continuing to feed the country.” Richard emphasized. “We are sustainable!”