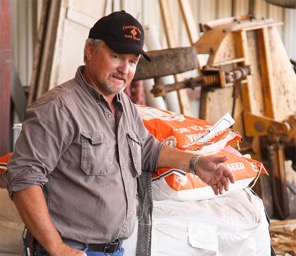 For Alan Mindemann, owner and operator of Apache Seed Farms in southwestern Oklahoma, being a good steward of the land is not something to be taken lightly. In fact, it is a driving force behind the decisions he makes on his farm every day. Alan’s great-grandpa settled near Apache in 1920 and the family has farmed there ever since.

“I had always been involved, farming in addition to off-the-farm jobs until I went full time in 1995. I started no-till in the very beginning and we’ve grown to where we are today.” He said.

Sound conservation practices have been a key to Mindemann’s success.

He noted, “On my farm, I have proven that the right thing for the land, and for the community as a whole – clean water and clean air, is also the most profitable thing to do.”

As a dry land farmer, Alan turns to prayer for the moisture his crops need, making sure the soil is able to capitalize on the moisture it receives. Especially in Oklahoma, some years rain falls in abundance, and some years it doesn’t fall at all. 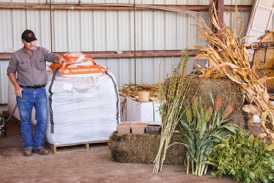 Alan uses no-till production and rotates a variety of cover crops to keep his soil in peak condition. Following the abundance of rain that fell in the summer of 2015, Alan saw first-hand the benefits of his conservation programs.

“We have much, much less run off because of better infiltration rates. If we have flooding like we did in May, when we received 22 inches of rain in the month, we don’t lose our soil.” He said. “Even if water runs over our field, which it actually did in several locations where creeks flooded, the soil stays put.”

Maintaining the quality and health of the soil has other benefits as well.

“We began using cover crops in 2005 as an erosion control measure and a nutrient cycling scheme.” He said. Allowing crops to return nutrients to the soil naturally means we use fewer chemical inputs.”

“As far as pesticide and herbicide use, it’s all a bare-minimum.” Alan stated. “We have integrated pest management systems to determine exactly what the issue is before we act on it. The last thing we want to do is over apply something, which is expensive and can create problems in our fields.”

He added, “The fertility of our fields improves using cover crops and no-till, so we use less commercial fertilizers. We can do that because we have the biology of the soil working for us.”

“We use every technology we can to monitor nitrogen in the soil, being conscious of what the needs are because we are concerned with the effects on water quality and the effects of over-application on our bottom line.” He said.

Alan believes his community benefits from farmers and ranchers serving as good stewards of their land.

“When the ground is covered we don’t create dust, which benefits everyone down wind.” He said.

“The county does not have to clean my ditches out after every big rain, which costs everyone.” Alan added. “My fields do not contribute to the silt in a municipal lake that sits in the middle of several of my farms; and the runoff does not end up in the water supply. It all benefits society as a whole.”

Alan’s exceptional stewardship has not gone unnoticed and has provided opportunities for growth.

“About three-fourths of my land is either one-year leases or zero-relationship leases from municipalities, the Core of Engineers or BIA that comes up for public bid every term. I treat all of those farms as if I owned them.” He added.

“I can’t rent poor land and be successful if I don’t improve it. The fact that landowners know I will improve their land has brought more opportunities to me.” He added.

Alan says a big part of being a good steward is considering who is coming after him. Someone else will need to make a living off the land.

He is not simply satisfied with implementing good conservation practices on his own land. He spends a lot of time sharing his story with other farmers to help them improve their own operations.

“I do presentations, consultations, and I’m a mentor to more than 15 beginning farmers who know they can call me at any time to ask questions and work through problems.” He said. “For someone who is just getting started it is essential to have access to a farmer who has experienced the challenges they face.”

Apache Seed Farms is living proof that many large farms are operated by families who take great pride in caring for their land, water and air.

“With today’s technology, I can farm three times as much as my father was able to.” He said. “I operate a large farm with my two sons and one part-time employee. We are still a family farm, even though we are a lot bigger than we were in previous generations.”

For Alan, it is all a part of living his dream. 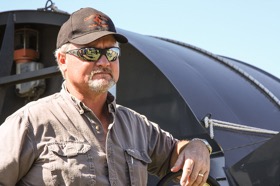 “All I ever wanted to be was a farmer, just like my dad. I didn’t get the chance until I was in my mid-thirties. At that point I decided I didn’t care what it took, I was going to be a farmer.” He said.

“There are farmers out here who really care about doing the right things for the land, for the community, and for the next generation.” Alan concluded. “I am just one of them.”