Like many farmers and ranchers in Oklahoma, the Coblentz family attributes its success to years of hard work.

“I was the youngest of four children. I picked cotton when I was five years old for a penny and half a pound, and hoed cotton for seventy five cents an acre. Forty-seven years later, I bought the
farm I picked cotton on.” Charles recalled.

“Our mom plays a very important role too.” Adam said. “She has a hand in everything from checking and feeding calves to bookkeeping.”

Their operation began as a dairy and has continued to grow and change with each family member adding education and expertise. And, their efficiency in producing an abundant food supply for
consumers continues to improve with advancements in technology. 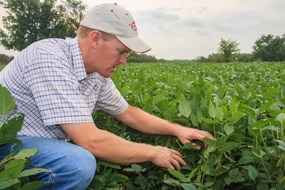 “I think people would be shocked to know too, that we spray far less chemical per acre on our crops today, than we did in 1995. And the chemistry is advancing each year.”

Consumers are often presented with misinformation regarding milk production practices. A quick look outside the barn when it is close to milking time reveals the cows gathering voluntarily, and waiting to go inside.

“Our milk cows are pampered.” Anthony said. “Ultimately, if you treat them poorly, they will not produce.”

Charlie also added, “There are no hormones or steroids given to our milk cows. Ever.”

In addition to the pricing issue all commodity producers face in the market, milk producers face a unique set of challenges as their milk is marketed through a, nation-wide cooperative.

“Milk surpluses have increased three percent in the last year, which has translated to a thirty-three percent drop in price for producers.” Charles said.

Adam noted, “We see this change in the market every two to three years, but milk has no shelf-life, so we can’t just hold it until the price goes back up.”

For the Coblentzs, like all farmers and ranchers across the state, the biggest variable in their operation each year is uncontrollable. Despite all the best planning and preparation, often the key to success is the weather.

“We can do everything 100 percent perfectly; not make a single mistake all year long, and ultimately Mother Nature is in control. We can have a single hail storm, or a lighting strike and lose a whole year’s worth of work.” Said Charlie. “We take so much risk, and the weather is ultimately in control.”