Clint and Jessica Wilcox have distinct production agriculture backgrounds that have come together to form a successful partnership in life and on the farm. In addition to running a full-service Crop Insurance Agency, they rotate crops including wheat, canola, milo, soybeans and run a few head of cattle on their farm near Fairview. 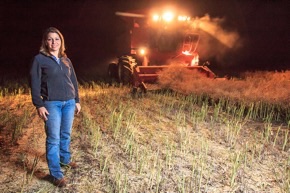 “I took my first steps in a corn field and spent my free time driving a tractor or running the sprayer.”She said.

Meanwhile, Clint was raised near Fairview on a wheat and cattle operation in close proximity to where the two of them farm today. 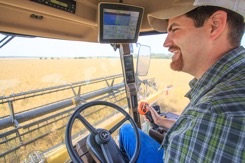 “I was planted into a tractor seat in the summers. The work ethic required was ingrained in me.” Clint recalled. “Most of my extra time was spent working on the farm.”

An opportunity to attend Oklahoma State University and further their education brought them together as classmates, friends, husband and wife, and farm and business partners. Clint earned a degree in Agronomy, with focused coursework in plant agronomy, botany and entomology. Jessica also graduated with an Agronomy degree and minors in Ag Economics and Ag Business.

Clint views their college education as a huge asset to their agricultural operation.

“I had an opportunity to go to Stillwater and meet others in the ag industry which helped me to become more open-minded.” He said. “When a student comes back to the farm from college, he has had access to new technologies and new production methods. They won’t all work in his specific situation, but he has reason to believe there is room for improvement.”

Jessica has a passion for sharing about production agriculture and educating consumers through social media.

“I love Twitter. It gives you a voice.” Jessica said. “I, as a producer, can communicate with consumers across the country who have questions about food production.”

Social media also gives the Wilcoxs an opportunity to learn from other producers across the country and internationally.

“I learn things from Canola farmers in Canada. I ask them questions all the time. If we are not progressing, and moving forward, we won’t be able to look back and see how far we’ve come.” She noted.

The Wilcoxs, like other farmers and ranchers across the state, view conservation as a top priority.

“I took a lot of environmental classes in college because it is important to me. When we do have kids, they will inherit this land. Our land is our legacy, and we want to take care of it.” Jessica said.

Clint agreed. “I am conservation minded because I want that land to be as productive as it is now, or more productive, for the rest of my life and for the lifetime of my future children.”

“It’s just like a car. If you depend on your car to make money, you better take care of it: change the oil, service the engine and take care of your breaks or eventually you aren’t going to have anything left. It’s the same with farming. I’m not the type of person that is going to allow poor conservation to rob my land of its production in the future.” He added.

Farmers and ranchers, as business operators, have long-range plans for their operations. In addition to plans for each growing season, producers make plans to improve their harvests years in advance.

Clint discussed an opportunity on their farm recently. “I had a field that would have made great hay, but I chose to spray it and built some soil and planted wheat right into it. As it looks now, that could be the best wheat I have ever harvested in my life.”

He added, “Right now things are really tight economically. What would have been best for our bank account last summer was to bale that hay. But what I felt like was best for our farm and the best option long term, was to spray the cover crop and let it sit on the soil. It was high-quality hay, but it looks now that I have improved that ground long-term and our wheat crop this year will benefit from our patience.”

The Wilcoxs believe the future is exciting for young farmers and ranchers like themselves.

“Farming has come a long way with increased production and improved conservation that has been made possible with new technologies like genetically modified crops. And, we’ll be doing things better in five years than we are today because of some new advancement in technology, fertilizer, chemical or production practices. In my mind, sustainability is about being progressive, and capitalizing on new technology to efficiently produce a safe, abundant harvest.” Clint concluded.

Jessica agreed. “When we can walk the line of: making money, being progressive, being conservation minded, and producing a great quality product – that’s when we achieve sustainability.”